Quick update for the family wondering where in the world Drew is:

Drew flew in from Okinawa to Seoul Thursday afternoon.  Apparently, boat repairs were finally finished, but 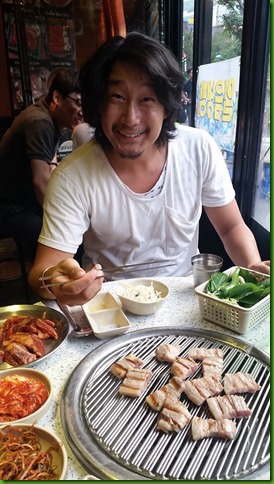 Larry was flying home to the States for his mom’s 94th birthday.  So Drew decided to cut his losses and fly to Seoul so he’d have a good couple weeks in Korea before his July 20th flight home.  We celebrated the return of the prodigal son by going to Hongdae for Korean barbecue and blueberry flavored soju (the yuzu flavor is much better, by the way).

Drew’s lodged at the same guesthouse as I am here in Edae in the room next door.  I introduced him to the magic of cheese donkatsu (pork cutlet pounded flat, breaded, and deep fried with cheese in the center, covered in a brown curry sauce) the other day for lunch, and today we’re planning on grabbing a couple pizzas with interesting Korean toppings (a few that stand out are cream cheese, sweet potato, and bulgogi) and watching the Korean film, The Flu for my class this week.  Apropos with the whole MERS drama going on.

In terms of Drew’s birth search, on Friday afternoon, he had an appointment with his friend Minyoung, who leads Korean adoptee tours and reunions here over the summer, and Sgt. Lee, the police officer who was able to track down Drew’s birthparents’ information.  Minyoung let us know we wouldn’t be meeting his parents, but would be able to get an update on Drew’s case.  Along with several other adoptees who are in the process of searching, and came to the police station to get DNA tests done, we met Sgt. Lee, but he was extremely busy that day and only had about five minutes to talk with everyone.  No time to go over Drew’s case, but Minyoung told us she’d talk to him again early this week, and hopefully set up another appointment to go over Drew’s case later in the week.  Minyoung’s prediction is that Drew will be able to meet with his birthparents before he returns to the States on the 20th.

Posted by Unknown at 7:13 PM
Email ThisBlogThis!Share to TwitterShare to FacebookShare to Pinterest