Spying on the Dog

Talking to Olivia through the PetCam.

Posted by Unknown at 5:55 PM 0 comments
Email ThisBlogThis!Share to TwitterShare to FacebookShare to Pinterest
Links to this post

I am currently auditing a course on visual cultures in Korea, led by Columbia professor Theodore Hughes at Yonsei University.  This week’s theme is “Colonial Cosmpolitanisms: Visuality and the Remaking of Seoul as Modern Metropolis.”  Each week, the students are required to write a response to the readings, discussions, and field trips covered that week.  I figured I’d contribute my own reactions and responses, for what it’s worth:


The past few days have gotten me thinking about history and memory, haunting and erasure, legacies, tradition, and globalization. I think that the erasure of colonial history, in the tearing down of buildings, in the renaming of streets, is, in a way a revision of history. To that end, I think our discussion of how these erasures do not “solve” the problems of Japanese imperialism is significant. Much of my work work focuses on the trauma, melancholia, and haunting of history, and our walk through Seoul on Monday revealed to me the palimpsestic quality of Seoul’s landscape. Even with shiny facades and new names, evidence of the influence of past eras remains in vestiges at every turn. Time and progress lie in layers, each era never fully erased. Anachronistic buildings remain to haunt Korean modernity much like the legacies and unhealed traumas of imperialism and war.

I am also thinking about complicating our understandings of Japanese imperialization, traditionalism and globalization. I don’t think these things are necessarily mutually exclusive. Korea’s wholesale dismissal of Japanese imperialism obscures the fact that the Japanization of its colonies could be seen as a form of globalization decades before the era of 신세계.* Conversely, a purely nostalgic view of Korean traditionalism ignores the socio-economic disparities and gender inequalities of Confucian society. Equating traditionalism with Korean nationalism also ignores the fact that for the majority of the peninsula’s history, it has not been a unified nation-state.


I was reminded how these notions of traditionalism and Westernization become complicated the other day when I attended the Korean Queer Culture Festival. I found the anti-gay protesters’ demonstrations to be an example of how so often we pick and choose aspects of history or

ideology to suit our needs without acknowledging how they can often speak to both sides of an argument. The anti-gay protesters argued that an “introduction” of homosexuality into Korea is destroying the “traditional” moral values of Korean culture. To emphasize this, many of the protesters dressed in hanbok and played samulnori. However, they also held a ballet performance, sang hymns, and congregated as representatives of their churches—all of which are cultural aspects with Western origins. I found it rather ironic that they were protesting the deviation from “Koreanness” in homosexuality through Western cultural performance and the invocation of Christian religious morals. Not to mention the fact that homosexuality isn’t exclusively a Western innovation that has “tainted” Korean sensibilities.

*Credit to Kristen Sun for pointing this out.

Posted by Unknown at 6:26 AM 0 comments
Email ThisBlogThis!Share to TwitterShare to FacebookShare to Pinterest
Links to this post

Rainy day today, so I took the opportunity to wander around the National Folk Museum of Korea at Gyeongbukgung.  I hadn’t been there in several years, so it was nice to revisit the exhibits.  I had a wonderful talk with a senior citizen who was a volunteer translator at the museum.  He told me all about Confucianism, patriarchy, and the twice-monthly mandatory conjugal visits men paid to their wives back in the day.
And then…
I stumbled upon the children’s museum area where the special exhibit, “The Scoop on Poop:  Let’s Explore the World of Poo!”


When most people talk about ‘poo,’ they consider it as a dirty and embarrassing topic. but is it just as dirty as they think it is? Poo is an important part of our life cycle and contains the story of life. Through this exhibition, we hope you realize the role poop lays in the ecosystem and rediscover the importance of it, as well as developing more knowledge about the ecosystem from fun and creative stories about poo.

Yup. An entire wing of the museum is an exhibit devoted to cute poo

characters.  There’s the grandpa poo, the poopfly, a round germy-bacteria creature that I assume is beneficial colonic flora, and the main character, the Golden Poo! The Golden Poo is what all other poos long to be.  Some are watery and sticky. Some are hard and nut-like.  Some are soft and mush.  But there is only one Golden Poo, the poo of perfect form and consistency.

Only the most powerful and healthy of bums can make the Golden Poo: 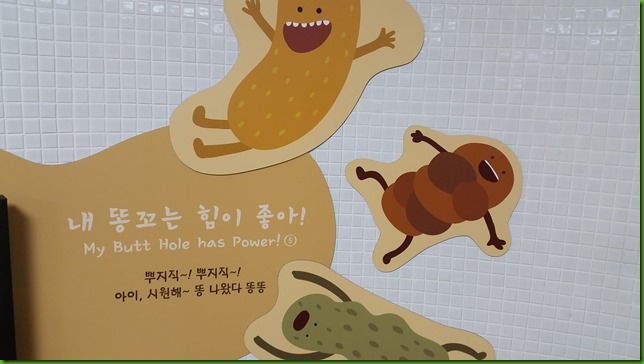 But never fear, ye of weak sphincters!  There is a song and dance to help you learn how to make the coveted Golden Poo! 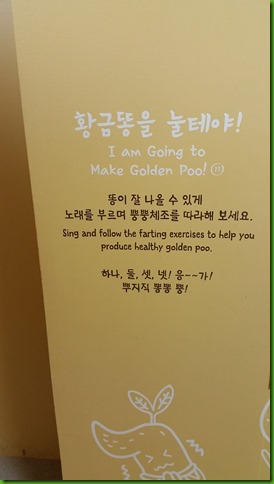 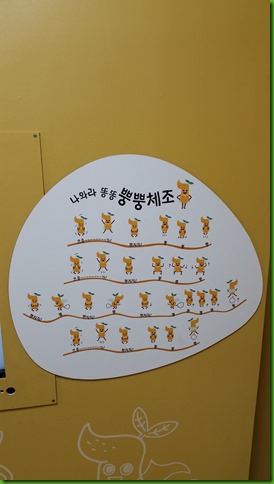 Because it’s geared towards kids (though, really, it’s fun for all ages, isn’t it?), there were lots of interactive displays, including a peasant’s toilet which directly became fodder in the pigpen juxtaposed with the plum blossom toilet of royalty, complete with the royal poo-taster. 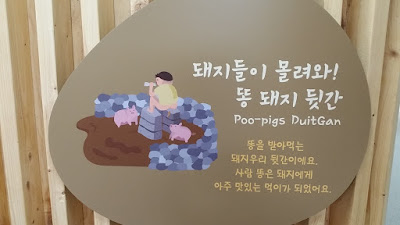 Before the invention of toilet paper: 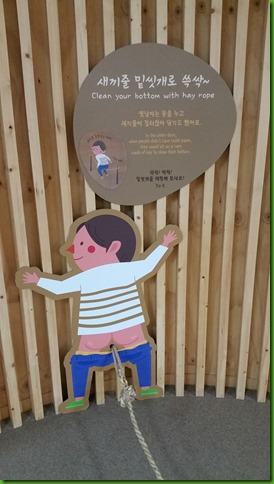 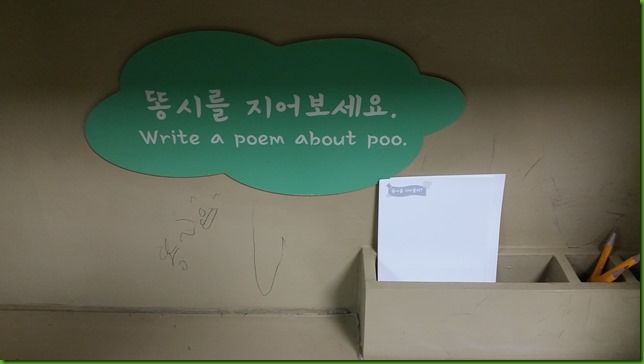 And for those who are more inclined toward poo-related art rather than literature, you’re in luck!  You can draw your poo and hang it on a board of bums! 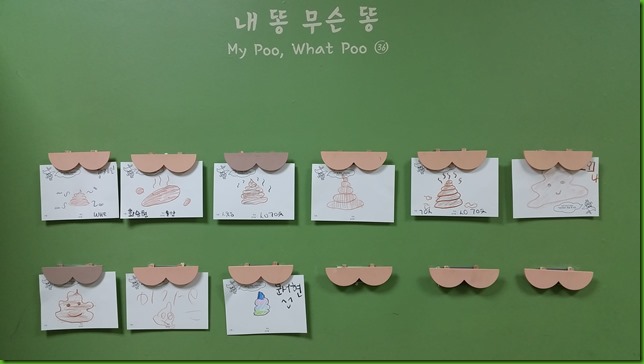 All in all, an educational, informative, and satisfying afternoon well spent! 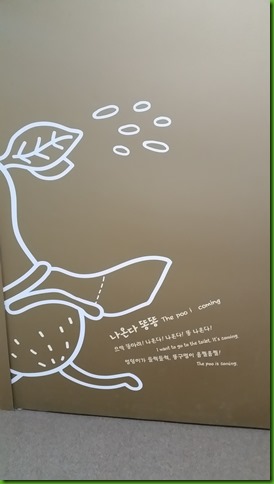 Posted by Unknown at 5:30 AM 0 comments
Email ThisBlogThis!Share to TwitterShare to FacebookShare to Pinterest
Links to this post

Spying on Olivia and Amul via the pet cam from my goshiwon. 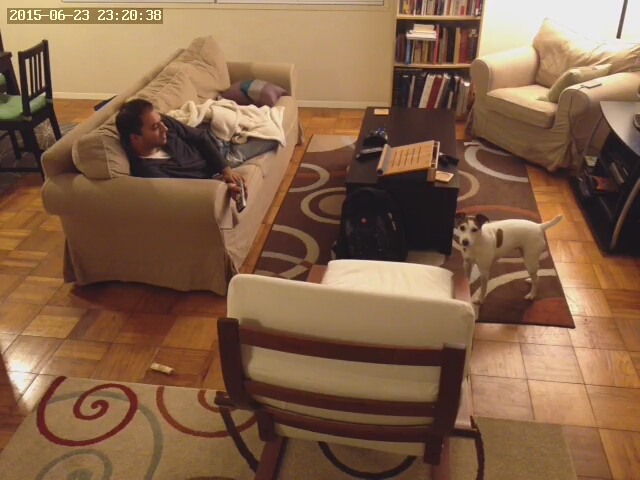 Posted by Unknown at 11:23 PM 0 comments
Email ThisBlogThis!Share to TwitterShare to FacebookShare to Pinterest
Links to this post

It was an acceptable loss.
From the fields of Geoch’ang,

where it is impossible to scrub away the dirt from beneath your nails,
where mosquitos swarm in black clouds incessantly in the hot, humid summer,
where the dirt roads snake along the countryside in indiscernible patterns,
seeming to trap you in their clutches like the Minotaur’s maze,
like the drudgery of poverty,
like guilt—

he had pulled himself from that mire, scrabbled determinedly into the shiny sleekness of modernity. The first in his family to leave home for the big city, the first to spend sleepless nights beneath the sickly glow of the fluorescent lights of the university library, doggedly consuming the language of modernization:

He ate them greedily, savored the salty decadence on his tongue. Nourished by the promise these words held, he felt himself transform. Like a summer cicada, he molted and emerged, refined, sophisticated, and cosmopolitan, leaving the dry husk of who he used to be clinging to the trunk of an old knotty pine that lined the dirt roads of Geoch’ang.

Through his metamorphosis, she remained. Simple. Easy. Uncomplicated. She loved him with a fierceness that he took for granted, this girl he had known since primary school. Amid the chaos of all the sparkling, glittering promise of change, she remained, steadfast, content with whatever remnants of his attention he could afford to discard.

And then things changed.
But not the ways he wanted them to.
No, in this, he desperately needed things to stay the same.

He abandoned her when she asked for more than he was willing to give. After years of quiet complacency, he turned his back, allowed his parents to dictate, and washed his hands of her. He convinced himself it was for the best. He wasn’t ready. He hadn’t asked for this. His country needed him.

Her father appeared at his door, a decorated war veteran, blinded by his country’s need. On his knees, this dignified man begged him to reconsider, to reach for her outstretched hand a complete the circle. But work-worn hands with the nails cut to the quick don’t belong entwined with ones sporting French cuffs and chrome cufflinks embellished with dazzling chips of cubic zirconium. So he closed the door and returned to dreams of the future that weren’t supposed to be put in motion yet.

He buried himself in his aspirations, turned a deaf ear when whispers about a baby girl drifted by. When friends back home shot him sidelong glances and shook their heads, he bought his parents an apartment in the city so he wouldn’t have to run into old playmates on the dirt roads of Geoch’ang. When he learned she had moved on, married, found God, bore a daughter “for keeps” this time, he shrugged. He couldn’t afford to tally the sacrifice and loss when there were plans to be made.

Time passed and life carried on, and he found himself on the corporate track with an acceptable wife, two sturdy sons, and the means to move his family into the glass skyscrapers that would protect them from the ghosts below that haunted him. Yet something still seemed lacking. Those golden days of his youth, holding hands, walking barefoot along the shore seemed so far away.

And every once in a while, he allowed himself to imagine a daughter. A quiet girl with his hands and his nose, and his youthful ideas and hopes for the future. He allowed himself to think back to his first love, who he was sure wouldn’t nag him about his cholesterol or spending too much time at the driving range and not enough time with the boys. He tried to rationalize the decisions of his past, devised a system of checks and balances to prove the gains far outweighed the losses. But somehow the ledger never came out even. Somewhere, an empty column lurked, throwing off all his calculations.

It was not a bad life he had made for himself. No, not at all. But he just wished sometimes some of the magic—the exhilaration of being young and in love—remained to carry him through those long hours at the office and into mundane nothingness of modernity.

Posted by Unknown at 8:24 PM 0 comments
Email ThisBlogThis!Share to TwitterShare to FacebookShare to Pinterest
Links to this post