A group of friends and I made the trip over to Seoul's fish market the other day.  It's a gigantic indoor market with hundreds of fish seller stalls.  It's open 24 hours a day, and every morning at about 3 am, they hold a wholesale fish auction that apparently is an experience in itself.  We opted to forego the 3 am visit, but went for dinner.  Probably 2/3 of the stalls were shut down for the day, but even still, there were plenty of vendors, and it actually was a little bit less overwhelming with a scarcer crowd. 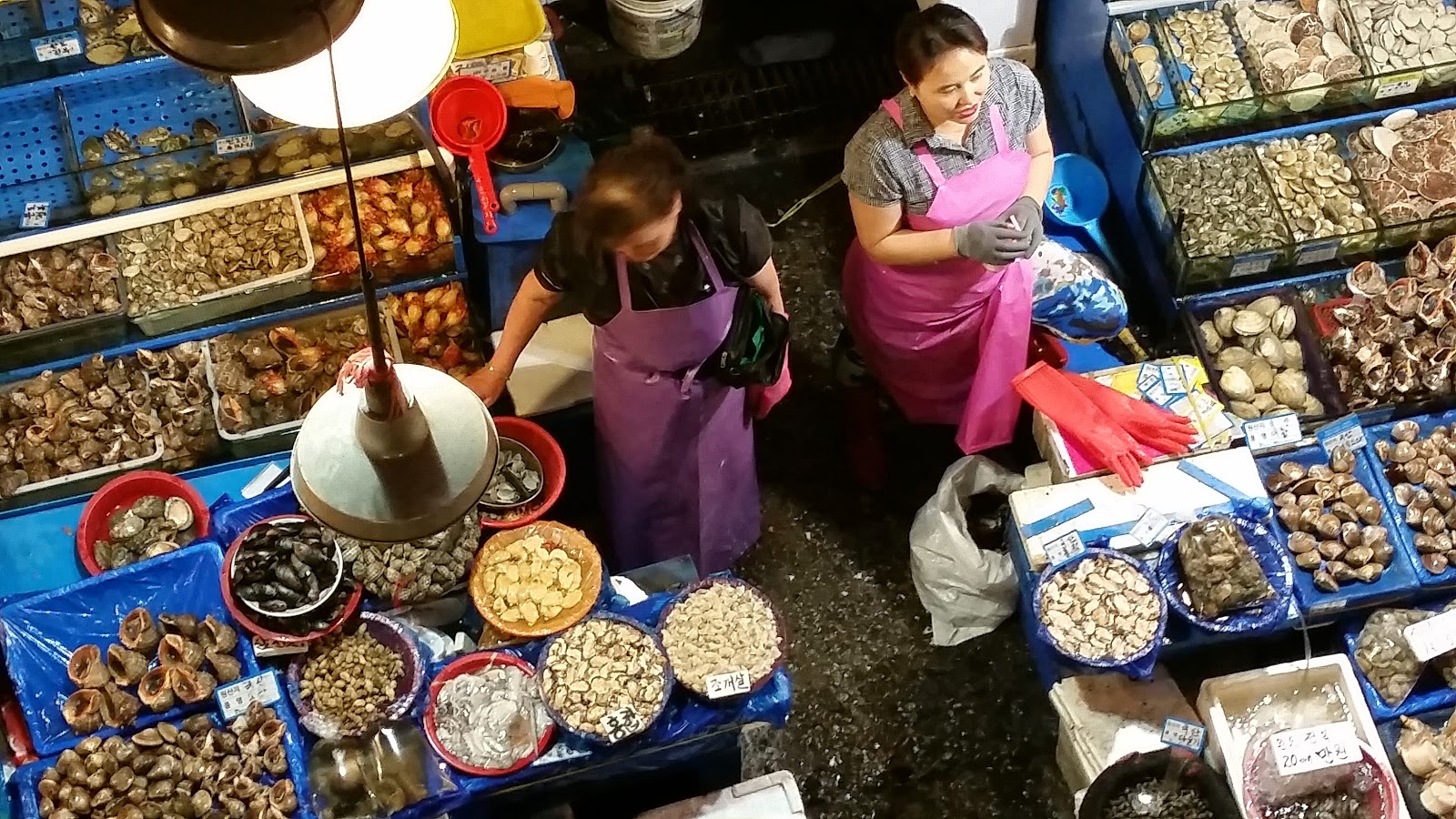 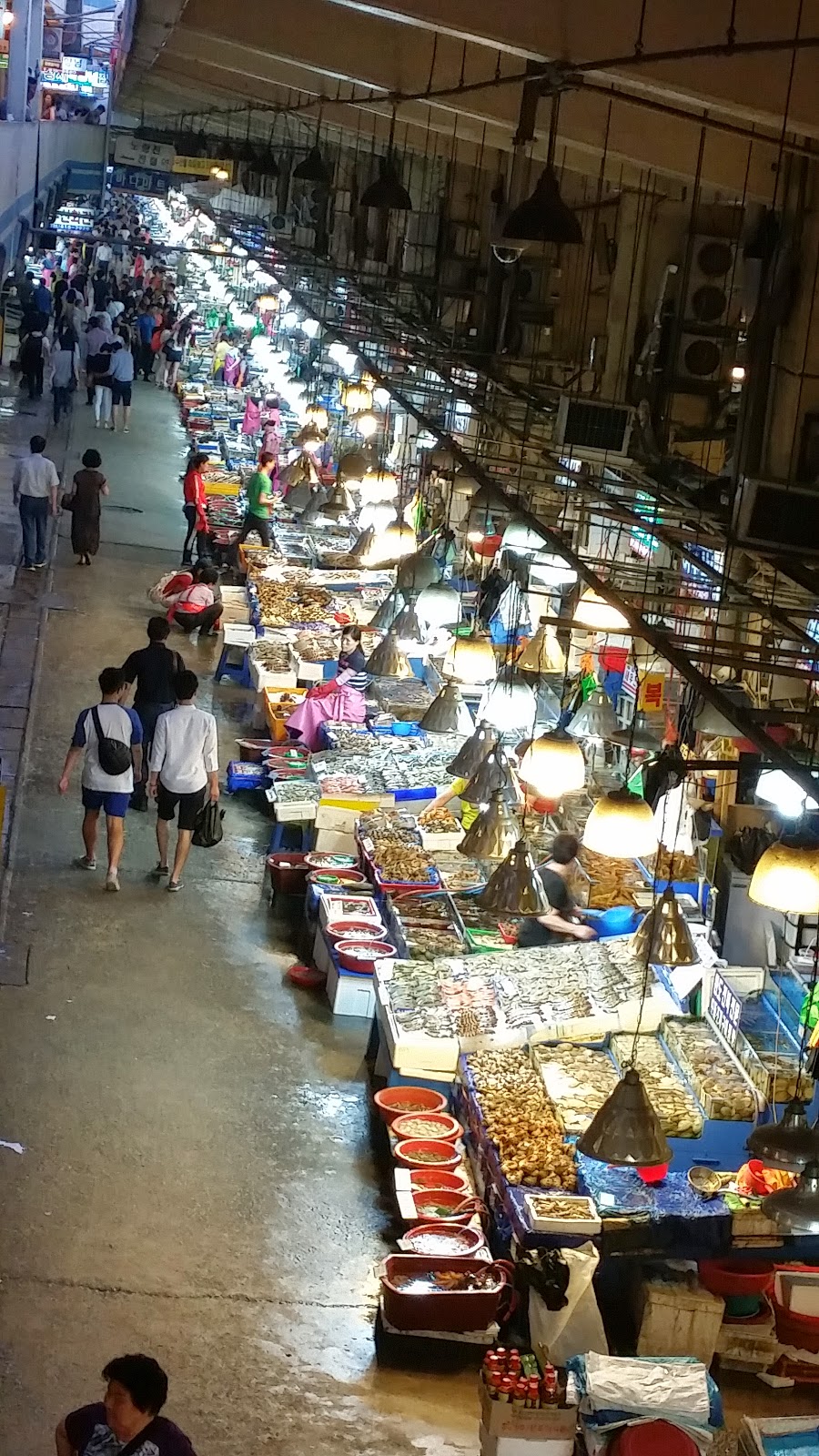 There was every type of fish and seafood you could imagine, and several that you couldn't. For example: 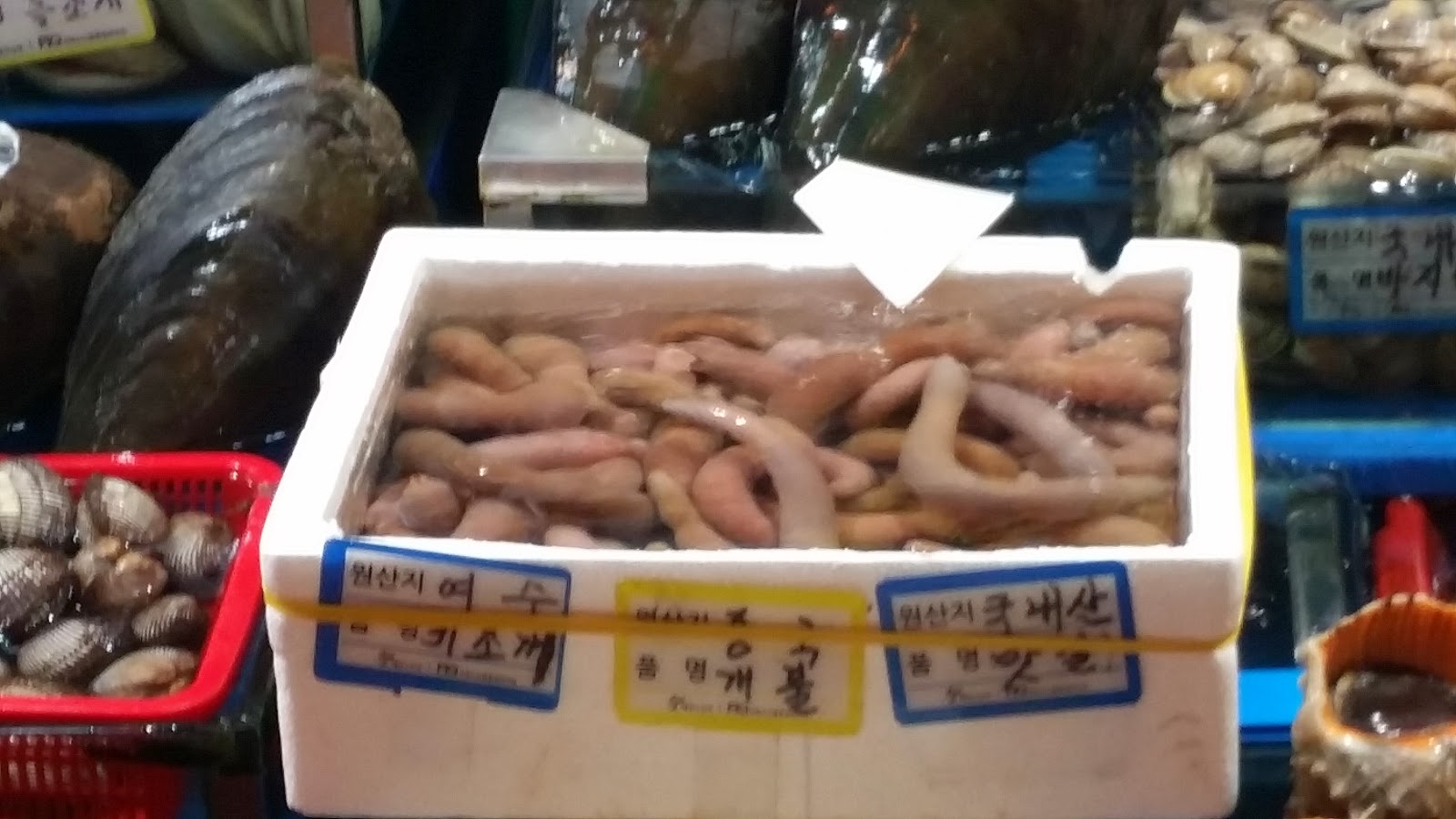 I have no idea what these are.  I know what they look like, though, when they're writhing and squirming around in a bucket together. 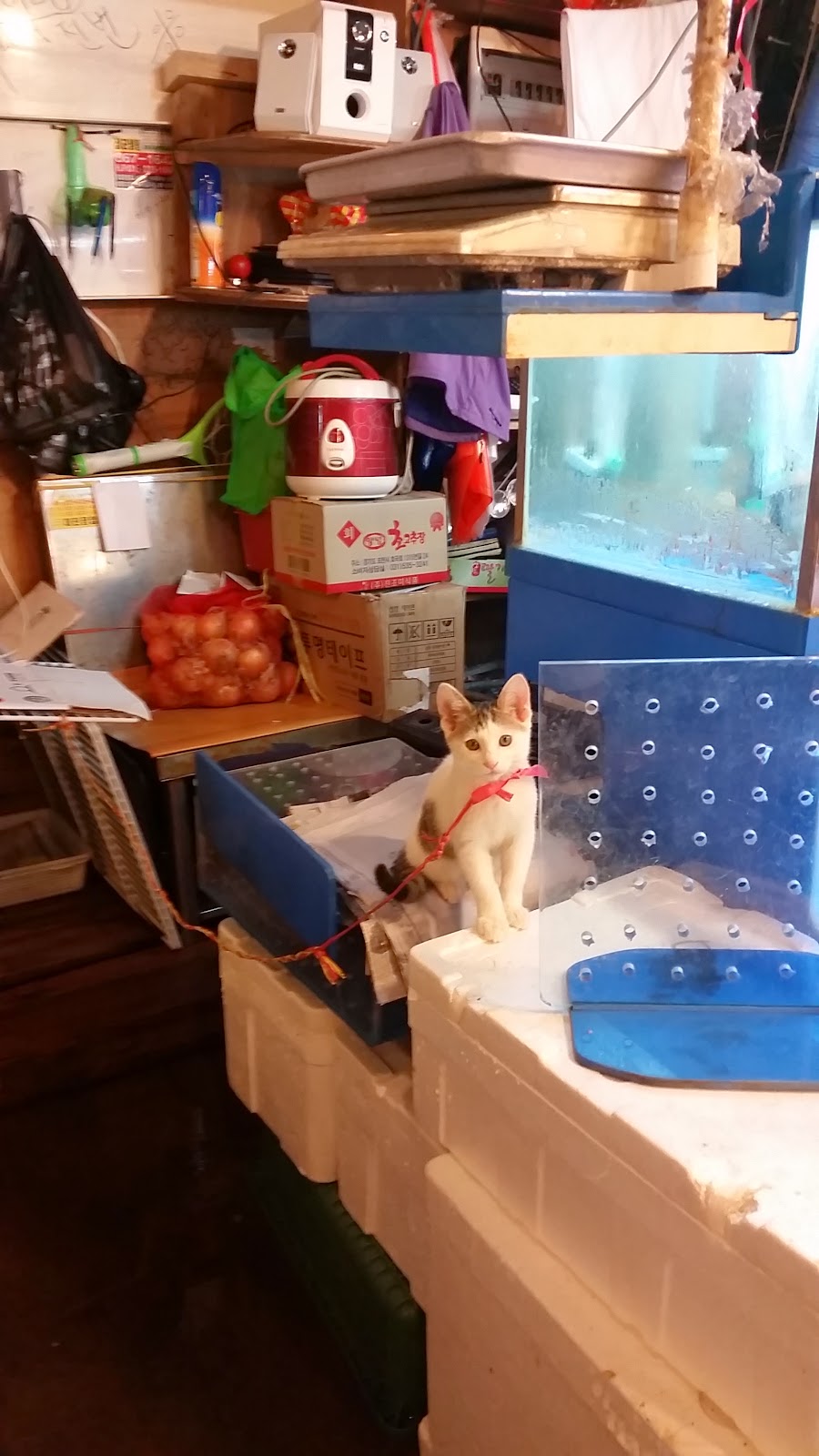 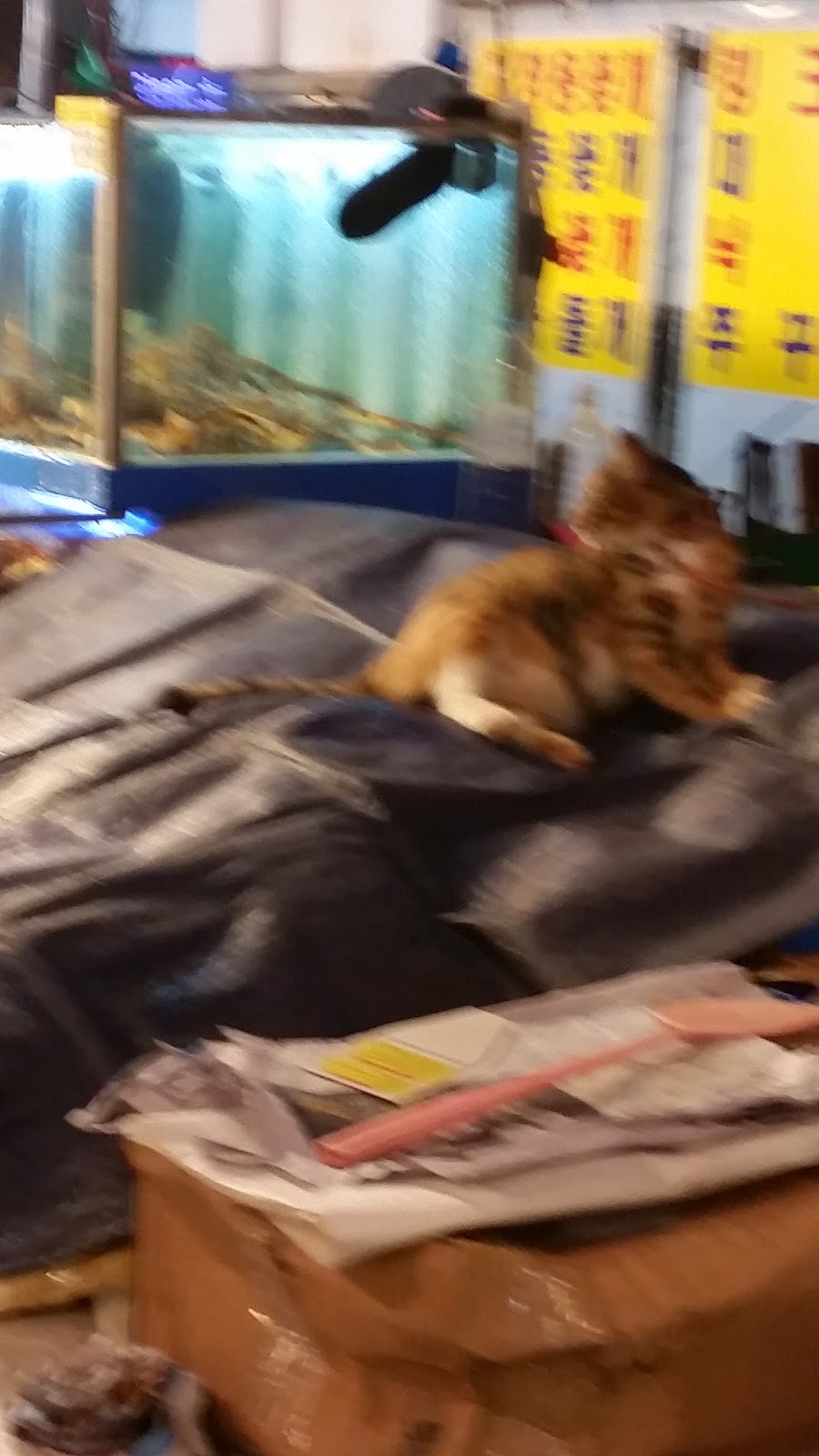 So the way it works is that you end up buying all your seafood from a single vendor. We knew we wanted shellfish and octopus, so we made sure to pick a vendor that had that.  We ended up getting several baby octopi (for sannakji--details on that later), a bunch of different mussels, about 10 gigantic prawns, a few things called sea pineapples, and probably some other things that I'm forgetting. 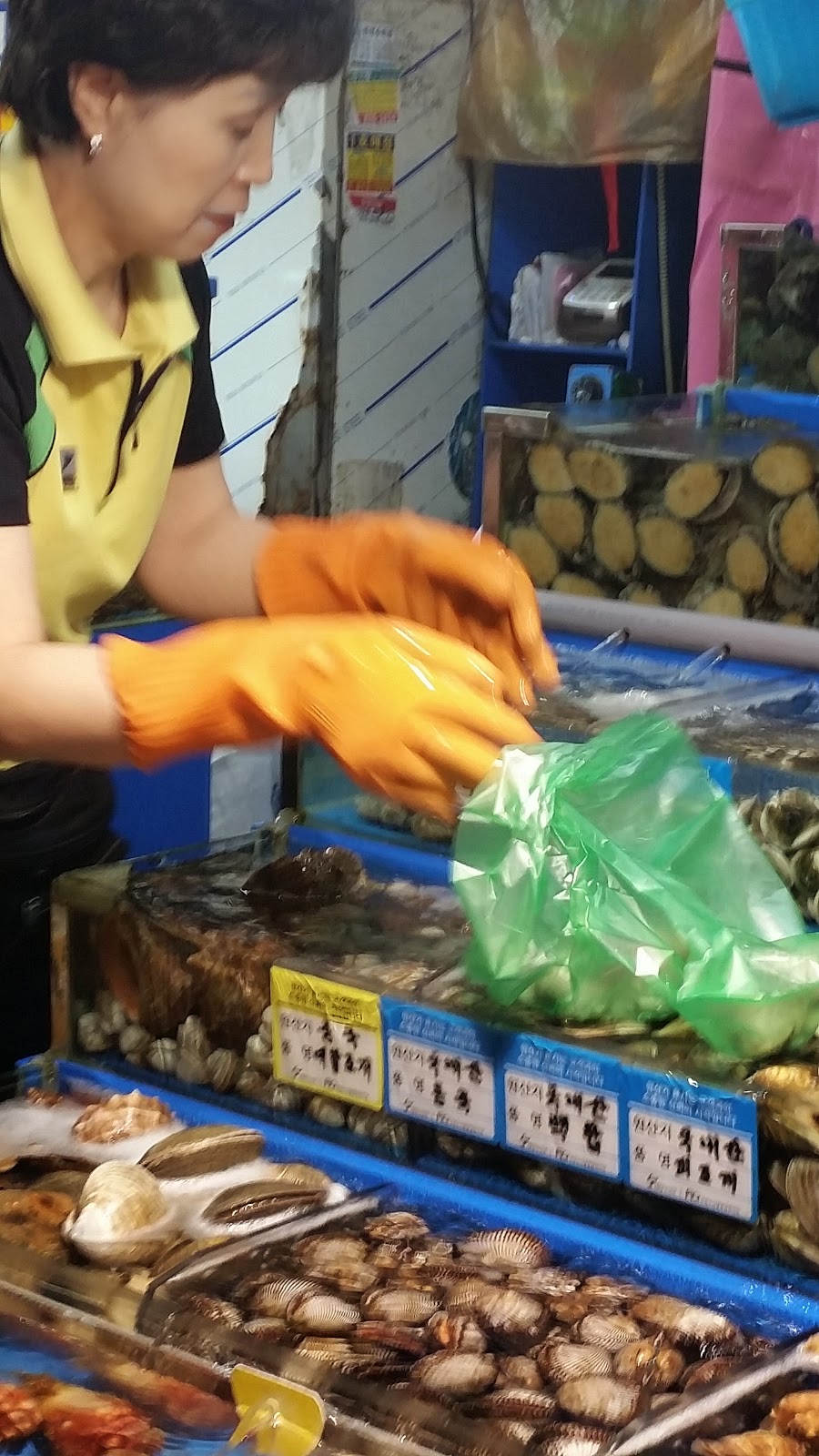 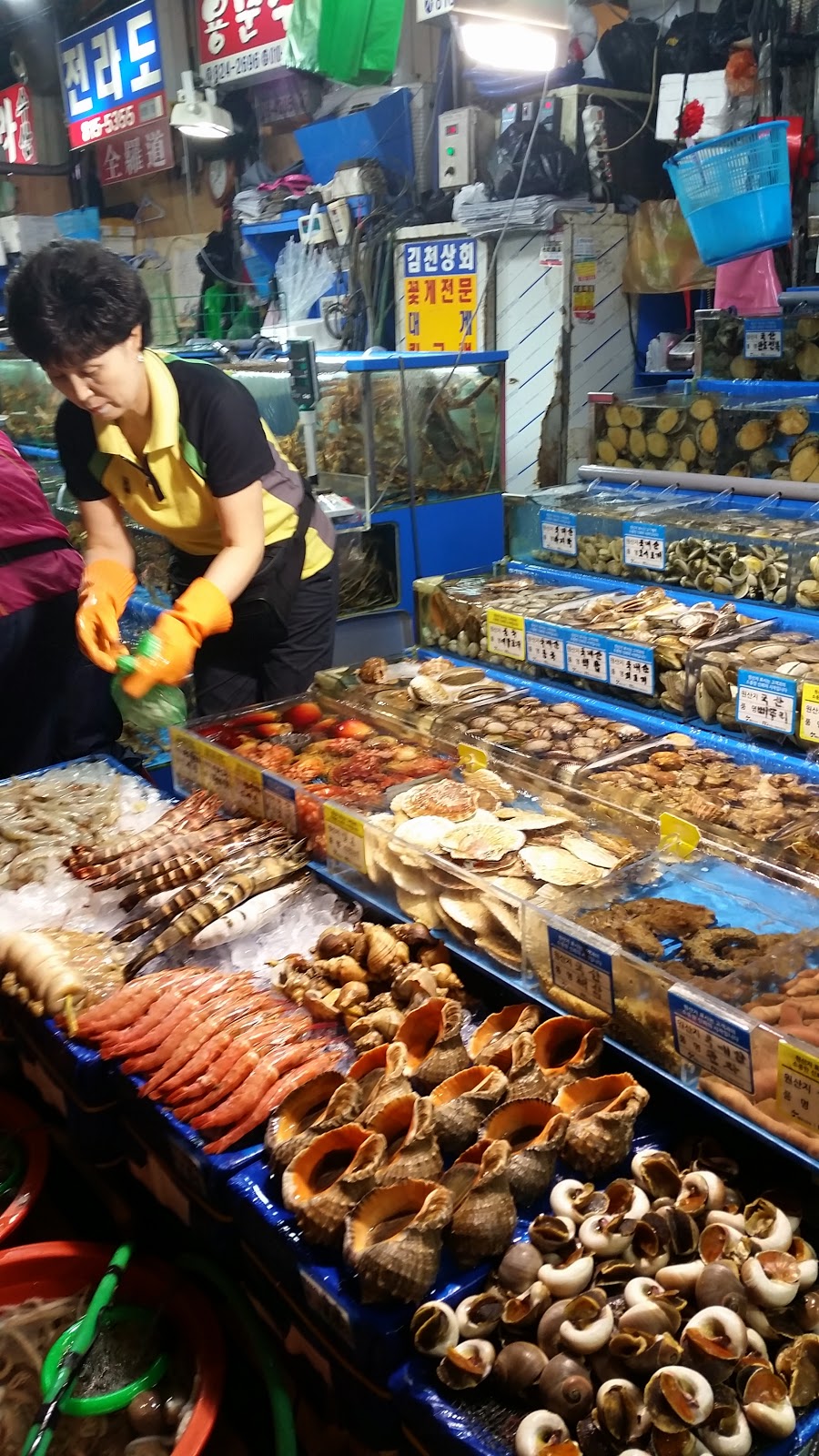 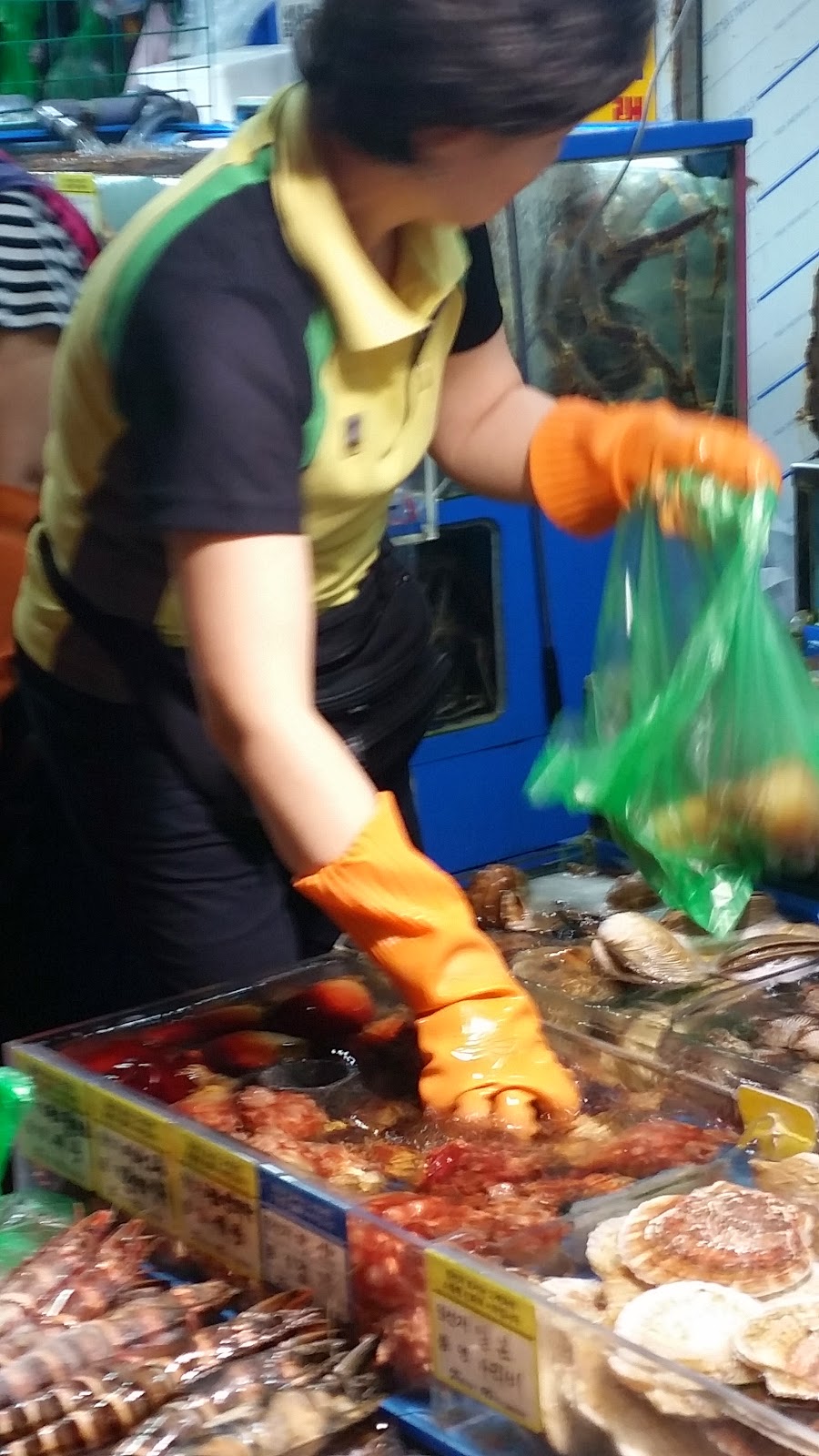 Each fish vendor is associated with one of the seafood restaurants on the second floor of the building. So having bought all our seafood (for 50,000 won, around $50), the vendor led us upstairs with our "catch" to the restaurant.  Our fish were handed over to the cooks at the restaurant, and were prepared to order.

One of the more bizarre foods that Koreans eat is sannakji, baby octopus. It's prepared raw and live; the cooks dice the octopus into small bite-sized pieces. By the time the octopus hits the table, it's very much dead, but the nerve synapses continue firing for quite a while afterward, so the tentacles are still slithering and suctioning when you eat it.  It's a favorite dish to showcase Korean cuisine on the weird food travel channel specials.

Aside from the strange experience of the tentacles suctioning to the inside of your mouth and wriggling around as you chew it, sannakji is actually really good!  You dip it in sesame oil, and raw, the octopus has a very mild flavor, and is not nearly as chewy as when it's cooked.

Our other dishes were not so adventurous, but still quite delicious.  We also opted to order the restaurant's house fish stew in addition to the seafood we had bought downstairs.


The restaurant bill came to about 60,000 won (the fish stew comprised 20,000 of that).  Split between seven people, the total ended up being about $15 per person.  There was plenty of food (we couldn't finish it all) and some of the freshest seafood I've ever had.
Posted by Unknown at 10:26 PM
Email ThisBlogThis!Share to TwitterShare to FacebookShare to Pinterest