I’ve been reading a book of Korean folktales I found at Koroot. This Korean scholar has collected and categorized over a hundred folktales into a number of subcategories in order to try and find patterns: 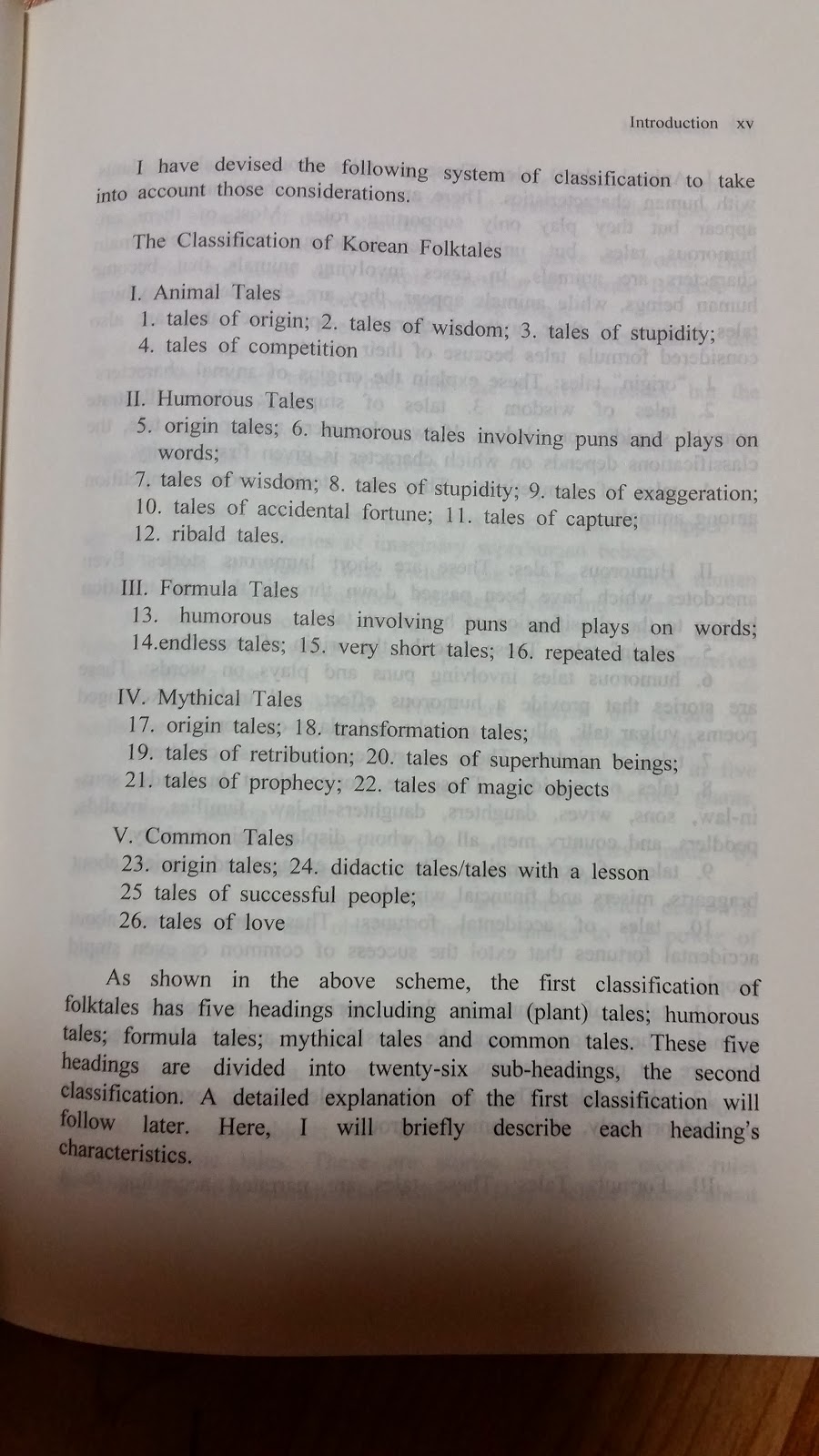 But what strikes me about Korean folktales is that unlike their Western counterparts, they don’t always have to have a lesson or a moral to make them worthwhile. Some are stories just for the sake of being stories.  Here’s an example:

One day a Dragon King held a banquet, inviting every imaginable fish there was. They all gathered in his palace and ate and drank until they were full. Everyone was having such a good time until something happened. There was a drunken hair-tail fish [that] was swimming here and there, swinging its tail, and he accidentally hit the King in the eye, blinding him.

The King was furious. “Bring before me every fish with a tail immediately,” he ordered the crab and the lobster.

The sudden change in the mood of the party frightened everyone and they ran away. The crab and lobster searched and searched for the fish with a tail, but they failed to find even a single one.

Feeling very foolish, the crab and lobster went ashore in search of the fish. Finally, they came across a ditch between two rice fields. They heard someone crying, so they followed the sound and found a big toad.

“Why are you crying so sadly?” the crab and lobster asked the toad.

“Is it true that the Dragon King ordered every fish with a tail to be brought before him?”

“Yes, that is true. But what’s the matter with you? You don’t have to worry. You don’t even have a tail."

“Of course, I do not have a tail, but it reminds me of the time when I was a tadpole.”

I also like that Korean folktales are a bit more ribald and silly than most Western tales:


The Tiger and the Dried Persimmon

Long, long ago, in the dead of winter, it was unbearably cold and the world was blanketed with snow. Birds in the sky and animals on the earth were having a very hard time finding food.

A starving tiger roamed around in search of food, but in vain. At last he decided to go down to the village at dusk and try to find something, perhaps a hen or a dog, to fill his empty stomach. He stopped under the window of a house, and stood listening to learn what was going on.

It so happened that a baby in the house began to cry. Then the tiger heard the voice of his mother saying, "Listen! Stop crying. There is a wildcat out there."

Still, the baby kept crying. The mother then said, "Oh my! A wolf is out there."

The tiger wondered, "How strange! A mere child, and it isn't afraid of a wildcat or a wolf!"

Then the mother hugged the child close, as if to protect him and said again, "Listen! There is a large tiger outside the window!"

Stunned, the tiger squatted flat on the ground. "How does she know I am here?" he wondered.

The baby continued to wail loudly, without a single sign of fear.

"He really is a ferocious child. He is not even afraid of me," the tiger thought.

Until then, the tiger had thought that he was the strongest and the most feared creature around the village, and he was greatly perplexed to find such a fearless child.

Then the tiger heard the mother saying, "Look! A dried persimmon."

Suddenly, the child's cries stopped, and all was quiet in the house.

The tiger thought to himself, "A dried persimmon! How ferocious he must be! That persimmon must be more dreadful than a wildcat, or a wolf, or even myself. I'd better get out of here at once and hide somewhere." So the tiger hurried to the stable.

That night, it so happened that a burglar broke into the stable, and mistook the tiger crouched in the corner, for a calf. He climbed on the tiger's back and slapped him on the rear to make him start walking.

"Dear me!" thought the tiger, "This fellow must be the dried persimmon!"

Terrified, the tiger rushed outside and ran through the hills, between the cultivated fields, up the mountains and across the plains.

The burglar, equally frightened, clung to the back of what he still believed to be a calf, trying not to fall off.

Meanwhile, dawn came, and the man finally saw that the animal was not a calf, but a tiger.

"Waaah! Now I am doomed!" the burglar thought, racking his brains for a way to escape.

Just then the tiger passed under a big tree, and the burglar caught hold of a branch, pulling himself up into the tree.

The tiger was so relieved to be rid of the ferocious "persimmon." Without daring to look back, he ran on. "He is really a terrible fellow. I hope I never meet him again! I am lucky to be alive!"

Just then the tiger met a bear. The bear asked him, "Mr. Tiger, where are you going so early in the morning, and in such a hurry?"

The tiger answered, "I have just had an awful experience. Last night, a dried persimmon climbed on my back and I have just gotten rid of it. And I am still running for fear it might return."

The bear burst into laughter. He pointed to the burglar in the tree and said, "What do you mean, 'a dried persimmon,' Mr. Tiger? Don't you see that he is a human being? Let us go and catch him and have a delicious feast."

The tiger shouted, "How can a man ride on the back of a tiger? I'm positive that he is a dried persimmon."

"If you don't believe me," the bear retorted, "then follow me."

With that, the bear proceeded ahead and the tiger timidly followed.

Meanwhile, the burglar was watching all this and hid himself inside a hole in the tree.

The bear climbed up the tree to the hole and looked inside, but he could not reach the burglar. So he sat on the hole, hoping to smother the burglar.

Finally, the gasping man could stand it no longer. Looking up, he saw the private parts of the bear dangling above him, so he untied his belt and cinched the bear's testicles tightly.

The bear roared in unbearable pain and fell over dead.

The tiger shouted," Didn't I tell you that he is a dried persimmon? If you had listened to me, this would not have happened." And he began to run.

The burglar then came down from the tree, butchered the bear and built a fire. Then  he heated a thin flat stone, roasted the bear meat and ate it.

The tiger, watching from a distance, suddenly found himself very hungry. He timidly approached the burglar and begged, "Mr. Dried Persimmon, could you give me some of the meat?"

The burglar said calmly, "All right. You shall have some. But when I throw a chop, you must catch it in your mouth and eat it before it falls to the ground. If you fail to catch it, I will eat you up as well. Do you understand?"

The tiger nodded, and the burglar threw the red-hot stone, saying, "Well, here you are!"

The tiger caught it in his mouth, but it was so hot that he gulped it down whole. His insides began to roast! He rushed to a stream to get a drink and he drank so much he couldn't move.

Then the burglar killed and skinned him, and took the skins of the tiger and the bear to the king. He was given a generous reward.

Able to live decently thanks to the reward money, he stopped robbing and lived happily ever after.

And some are so short they can barely be called stories at all:


The Shortest Story in the World

Once upon a time, there lived a sandal peddler. One day while he was making straw sandals, he began to laugh very loudly and then he died.

Posted by Unknown at 6:43 AM
Email ThisBlogThis!Share to TwitterShare to FacebookShare to Pinterest