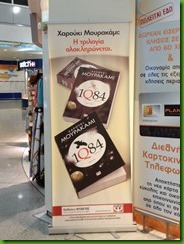 For vacation reading, I just finished Haruki Murakami’s 1Q84 last week in Athens, and really liked the story of the Town of Cats.  Mostly because I like anything that is furry and has four legs.  But the symbolic meaning struck me as well.
After two and a half days on Mykonos, I can say with certainty that it is an Isle of Cats.  Literally more than figuratively.  Big cats, little cats, fluffy cats, skinny cats, dirty cats, brave cats, shy cats, ugly cats, cats in dumpsters, cats living in ancient Greek ruins, cats at the fish market, cats in cafes—Mykonos has them all.  And while I know the damage feral cats can do to native flora and fauna, and know the difficulties of having un-fixed feral feline populations, I did enjoy seeing a kitty around every corner and alley. 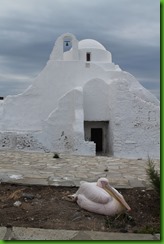 Mykonos is also home to a pelican named Petros.  Legend has it that a Mykonian fisherman found a wounded pelican while out at sea in 1954.  He brought it aboard his fishing boat and nursed it back to health.  Rather than winging away once it had recovered, the pelican remained on the island, revered by tourists and residents alike.  Named Petros, the pelican became the mascot of the island, and lived for nearly thirty years in and around the town and port, receiving the choicest catches of the day from the local restaurants and fishmongers.  Petros was killed in the mid-1980s by a drunken tourist’s car (one version of the story says he was the victim of rape by a drunken tourist), and mourned by everyone on the island.  So beloved was he that they soon replaced the original Petros on the island with a new pelican (some say a gift from Jackie Kennedy-Onassis).
Today, there are three pelicans that make their home on Mykonos.  One white 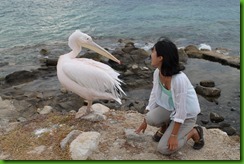 pelican has been named for his predecessor, and two pink-hued pelicans keep him company.  We met the new Petros our first night on our island, when he made an appearance at the restaurant we were at for dinner.  He wandered down the alley cool as you please and stuck his head in the door, begging the kitchen for 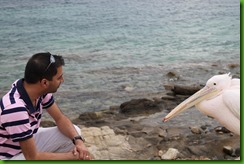 fish.  Waiters rushing in and out affectionately ruffled his crown feathers on their way.  One waiter took a moment to chat with Petros, cradling the bird’s head in his hands before gently shooing him out of the way.  Petros responded by opening his beak wide for fish, but when he realized he would be denied a snack, trudged back down the alley from whence he came, in search of a more generous patron.  Unfortunately, we were unable to get a photo of Petros that night, but we met his pink buddies the next afternoon.
Mykonos is known as the gay party island, and we were warned of the raucous beach parties when we told people we were traveling to the island.  But we stayed a twenty-minute walk away from town at a hotel on the cliffs and found it very peaceful.  Our first evening on the isle, we wandered the windy pedestrian alleys of town, filled with colorful souvenir shops, bars, and cafes.  We found a waterfront bar and ordered some drinks to nurse while we waited for sunset.  The hour or so we spent on our little terrace bench sipping passionfruit martinis and hand-muddled basil vodkas was well worth the rather steep drink prices, and we witnessed a beautiful sunset on the watery horizon. 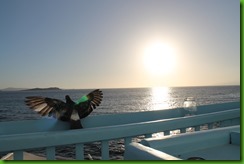 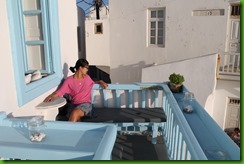 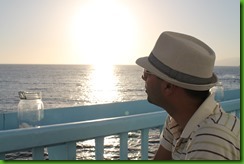 Dinner that night was at a restaurant recommended by the concierge at our hotel (where we met Petros).  I had some of the best lentil soup in my life, and Amul tried the local special of grilled sardines.  We saved the sardine heads and fed them to the stray cats we encountered on our walk back up the cliffside to our hotel. 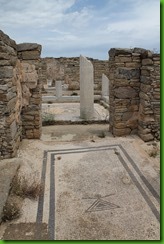 The next morning, we awoke (relatively) early to catch a ferry over to the neighboring island, Delos.  Delos is a (now) uninhabited island that was home to a flourishing civilization centuries ago that was wiped out by pirates and raiders long ago.  The island is basically an open-air museum now, and Amul and I spent the morning wandering about the ruins, treading on the same streets as ancient Greeks did two thousand years ago.  What’s left of the civilization in the ruins is remarkable beautiful mosaic floors have been overtaken by wild Queen Anne’s lace, vivid frescoes adorn crumbling walls, lizards dart in and out of abandoned pottery shards.  Yet, tall marble columns still proudly stand, and the complex 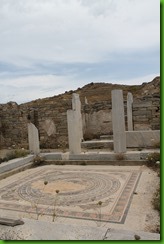 aqueduct and waterway systems still flow beneath the city, and water still sits ready to be drawn up from the individual well accesses in each of the residences. 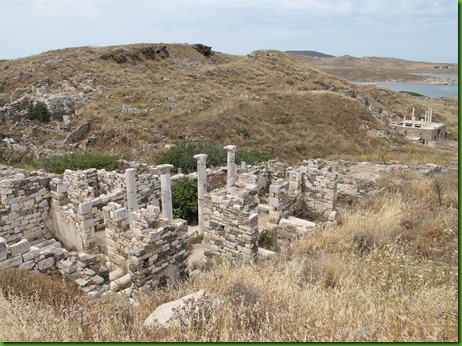 Our final evening in Greece was spent drinking the last of Vasso’s wine on our hotel’s terrace, watching the dark envelop the ships in the harbor, enjoying Greek desserts handmade by the local baker.  A quick puddle-hopper of a commuter flight this morning got us from Mykonos back to Athens, and now we sit in Athens airport, waiting for our flight to Rome.
Posted by Unknown at 4:15 AM
Email ThisBlogThis!Share to TwitterShare to FacebookShare to Pinterest