Our first full day in Athens was a lot of fun.  Great weather, wandered all around the Plaka region of the city.  We’re slowly getting over jetlag, so we came back to the hotel a couple of times during the day for much-needed naps, but we ended up staying out till around midnight.

From around our neighborhood: 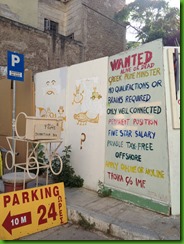 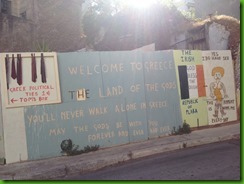 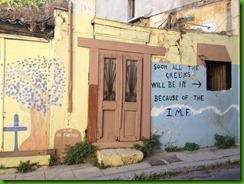 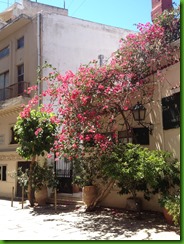 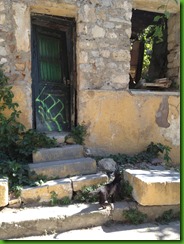 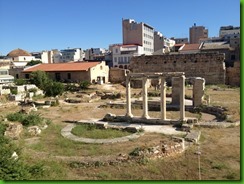 In the morning, we wandered around Athens’ Central Market, which is full of vendors who sell produce, pickles and olives, nuts and legumes, fish, and meat.  There were so many butcher’s stands!  And apparently the aesthetic way to sell goat and lamb meat is to display the freshly-butchered skull, skinned, but with the eyes and eyelids still intact.  We sampled some street food along the way, and then headed back to the hotel for a short breather.

After lunch, we trekked up to the Acropolis and spent the afternoon walking around all the ruins, which were amazingly impressive.  We were also entertained by some great tourist people-watching, and I took a bunch of pictures of all the stray cats and dogs that make the site their home. 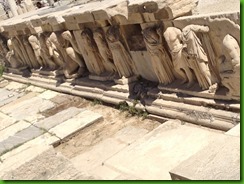 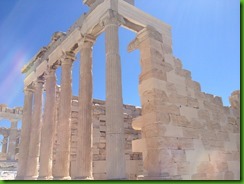 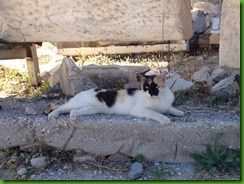 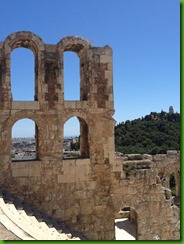 We made our way back down from 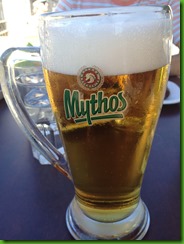 the temples and enjoyed a teatime snack of cookie flavored gelato waffle cones (so much better than U.S. cookies n’ cream flavor!).  We enjoyed a happy-hour half-liter (or litre since we’re here in the EU?) of Mythos beer (much better than last night’s FIX) and a plate of olives, and wended our way back home, quite tipsy.

After another nap, we headed out again to find dinner, and Amul took us to a local restaurant he had found great reviews for.  Definitely a good find, we ordered a Greek salad, moussaka, and “meatballs” with “baked potatoes” (which were actually flattened meatballs—more patty-like—and fries).  All were fantastic.  We had a stray cat come up to our table and beg scraps like a dog, but he apparently was rather snobbish, because he turned his nose up at the fry we offered him.  I think he had his eye on the shrimp heads on the table next to ours. 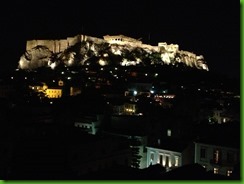 We wandered through the winding pedestrian alleys after dinner and ended up at the rooftop bar at the Hotel Central, which has a great view of the entire city.  We enjoyed iced cappuccinos while admiring the acropolis lit up against the starry sky.

Back in our hotel room now, we’re getting ready for bed after a busy and fun day.  Tomorrow we’re planning on checking out the National Gardens, the original Olympic stadium, and possibly the Acropolis museum.  Then it’s back to the airport to fly to Santorini tomorrow evening!

Posted by Unknown at 9:56 PM
Email ThisBlogThis!Share to TwitterShare to FacebookShare to Pinterest