I’m hell bent on maintaining my record of only attending schools whose colors are yellow and purple or blue (alternating respectively).  My high school colors were purple and gold (the Fighting Scots!).  University of Michigan’s colors are the illustrious maize and blue.  SFSU’s gators are purple and gold (btw, I’m a Master Gator, did you know?).  I submitted my PhD application to UC Berkeley the other day.  I’m hoping to adorn myself in the Golden Bears’ yellow and blue.  I’m not really sure how good my chances are, but I’m keeping my fingers crossed…

Posted by Unknown at 9:57 PM 0 comments
Email ThisBlogThis!Share to TwitterShare to FacebookShare to Pinterest
Links to this post

Press conference this afternoon at the Korean American Community Center in a statement condemning North Korea’s attack on South Korea. 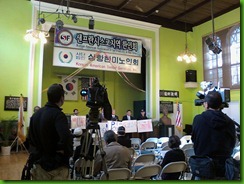 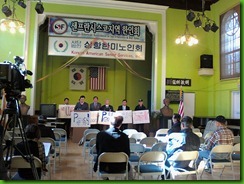 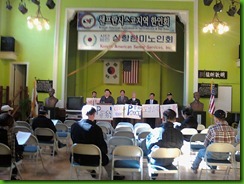 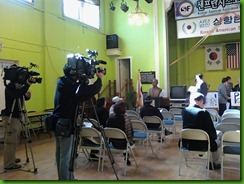 Posted by Unknown at 3:00 PM 0 comments
Email ThisBlogThis!Share to TwitterShare to FacebookShare to Pinterest
Links to this post

Ping
testing a blog distribution service...
Posted by Unknown at 9:26 AM 0 comments
Email ThisBlogThis!Share to TwitterShare to FacebookShare to Pinterest
Links to this post

It’s always a good weekend when Korean food is involved.  I’m convinced that my bout with severe illness right after I got back from Korea was a result of kimchi withdrawal.  In an attempt to stave off future maladies, I think it’s highly important that I maintain a quota of Korean food consumption.  It’s for my health, you see.

Amul’s brother, Rahul, is as much of a foodie as we are.  He was here this week for business, so Amul and I made a trip over to Kukje on Friday night to stock up on supplies.

I always look forward to this time of year for the produce options that abound.  It’s not the harvest season for nothing.  I love how readily available pomegranates, persimmons, and Korean pears are here in San Francisco.  Olivia is turning into quite a herbivore as well.  She’s always loved carrots and apples, but lately she’s expanded her palate to include Korean pear and persimmon.  They compliment the gourmet Spanish almonds nicely, heh.

Saturday morning dawned rainy and cold, so Amul and I warmed up with a breakfast of vegetable jook and Korean barley tea.  Jook’s a Korean rice porridge/gruel.  It’s become a comfort food for me, warming and mild.  We garnished ours conventionally with pine nuts and sesame oil.

Sunday morning, Amul and Rahul were just going to have cereal for breakfast, but I insisted on trying out my newly acquired recipe for ho-tteok.  Ho-tteok is a Korean street food, it’s a chewy fried pancake that’s filled with melted cinnamon sugar and chopped nuts.  I ate one like every day when I was in Korea.  So my attempt at making them at home was surprisingly a huge success.

Rahul was so impressed by his introduction to Korean food, that he insisted we spend the afternoon at Kukje so that he could take supplies back with him to Boston.  So lunch was consumed at Kukje’s shiktang.  We gave Rahul a nice sampling some more Korean dishes:  tteok mandu guk, dolsot bibimbap, and mul naeng myun.

Last night, in an attempt to make a dent in the leftovers in our fridge before we head out of town for the holiday, I experimented and threw some ingredients (heaven help me if I had to recreate the recipe) into the wok and ended up with pork kimchi fried rice.  It was actually pretty yum!

I think our next cooking project is attempting to make our own kimchi.  Amul’s gotten all the necessary ingredients.  We shall see how it turns out…

Posted by Unknown at 9:24 PM 0 comments
Email ThisBlogThis!Share to TwitterShare to FacebookShare to Pinterest
Links to this post 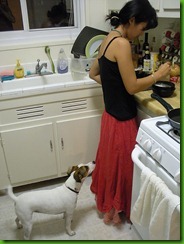 Never let it be said that my dog doesn’t have impeccable taste.  She accompanies us to Wine Country, and we have our favorite restaurants where Olivia can join us as we dine.  Amul and I do a lot of cooking, and Olivia’s always our helpful Sous Chef.  She’s helped us make homemade pasta, lobster, stuffed mushrooms, Oysters Rockefeller…  Like any good assistant, Liv gets to sample what she helped create.

This weekend, though, Olivia decided to take matters into her own paws.  Amul, Rahul, and I visited our favorite gourmet grocery store in San Mateo on Thursday evening.  We picked up a few bottles of wine and a container of our favorite Spanish almonds.  Somehow, the almonds didn’t get put away, and got left out on our dining room table.  Friday afternoon while Amul and I were at work, Olivia took advantage of our oversight and ate the entire container of almonds.  Mind you, these are no ordinary almonds.  These are gourmet Spanish almonds seasoned with sea salt.  These are $25 a pound almonds.

Amul came home Friday evening from work to a puppy that had a very very full bladder. When Amul 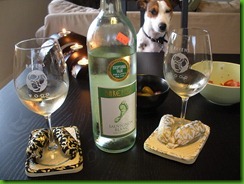 returned from taking Liv out for a potty break, he found out why.  Liv had eaten all the almonds, but the salt had made her really thirsty.

I reckon Olivia’s regretted her decision to indulge after two days of vomiting up a stomach full of almonds.  Though I doubt she’ll remember this lesson in moderation the next time we leave something yummy out…

Posted by Unknown at 9:01 AM 0 comments
Email ThisBlogThis!Share to TwitterShare to FacebookShare to Pinterest
Links to this post

We took in Korea's most popular and longest running theatrical show. Its called Nanta. It's the story of 3 chefs in a restaurant that need to meet a tight deadline for the night's dinner. On top of that the Maitre d' brings in his nephew to train in the kitchen. It's a musical comedy with no words.
The actors and actresses perform everything in rythem from chopping veggies to mixing foods. Think of the show "Stomp" but it takes place in a kitchen and knives are flying all over the place!
A couple videos (not by us) give you a glimpse of the show. If you find yourself in Korea you should try to see it; it' a fun evening.
The knife skills of the actors on display (this is actually at some trade show or event and not in the actual theater):
Traditional Korean drumming mixed with modern performance by Nanta:
Posted by adsathe at 8:40 PM 0 comments
Email ThisBlogThis!Share to TwitterShare to FacebookShare to Pinterest
Links to this post

Growing up in the US watching American TV shows and movies I learned about the American dating culture. One thing I learned is that its a rite of passage to for a guy to some day meet his date's parents, usually in some awkward instance designed for TV laughs, and be questioned about his "intentions". It would usually be that he drops off his date and her parents drag him in and he sits unprepared for this meeting on the couch as her father gives him the 9th degree.
In the past 26 years of my life I haven't had this experience. That tells you of two things: 1) I didn't date much in high school and 2) If I did, I already knew the girls' parents and they knew me. That all changed a few weeks ago. I had to go to Korea to get this experience and to make matters even more complicated, the whole thing transpired in a language that I don't speak. And it was such a great moment!
I was excited to meet Omma. Prior to our trip we weren't even sure if I'd get to meet her. Little did we know that Kira's meeting with her family would turn out so well, that they would connect on every imaginable level, and that there was a mutual love and interest to further develop the relationship. The week and a half before I came to Korea was filled with wonderful stories about Omma and how Kira was slowly finding out more about her. When Kira told me that Omma wanted to meet me, I was thrilled!
Omma met us in Busan along with an Imo-Halmony and Imo-Halmony's son. I saw the resemblance in both physical features and personalities. I like that they have the same tiny ears.
We all went out to lunch near our hotel. We sat at a traditional table where you sit on the floor and the table is lower. I've always had trouble sitting cross legged for a long time because my legs are so darn long. On top of that everything in Korea is small. It made for some good laughs for all of us. Omma, like any good mother, was intent on feeding me lots of food. Everyone's stuffed and there's one more serving of noodles left in the communal bowl? Give it to Amul!
At one point I burned my mouth because the food was too hot and I was too ambitious to eat. When the final course of steaming hot rice porridge was ready to eat Omma and Imo-Halmony emptied out a plate and told me I should spread it out to let it cool so I don't burn myself again. Exactly what my mother would have done:) We all had a good laugh. Of course this all transpired through them speaking Korean and gesturing but I knew exactly what they were saying. Its true what they say, eating meals together is the ultimate social activity to bring people and cultures together.
Later in the afternoon we went to a coffee shop. We all got to speak a little more to each other as Imo-Halmony's son who speaks some English helped translate. At one point Kira excused herself to go to the bathroom. At which point Omma turns to me and asks a question. I look at Imo-Halmony's son to translate and he says:
"So... why do you like Kyung Joo?"
This is it! The life experience I've never had. Being questioned by my date's parents and being caught completely off guard. Except its my fiancée and we've been together for 3 years, not 3 dates and its all happening in Korean!
How do I sum up my feeling for Kira and why I like her? We just go together so well! So that's what I said, "We get along so well, its her personality and sense of humor. We've been best friends for 5 years* before we started dating, and we've been dating for 3 year. We really connect well with eachother. I like her because I like just being with her. " I was hoping that would translate properly and I think it did. As I looked across the table I saw two nodding heads of approval.
*For those of you who didn't know, it took Kira 5 years to realize that I was the right guy for her. For 4 and a half of those years I was the best friend with a secret crush on her. She had been dating a different guy that whole time. She finally realized she belonged with me when I moved away to California. Hopefully its inspiration for all of you boys and girls who have crushes on your best friends. The whole story could be a separate blog/movie.
Posted by adsathe at 7:33 PM 1 comments
Email ThisBlogThis!Share to TwitterShare to FacebookShare to Pinterest
Links to this post

The top pictures from our Korea trip...

Posted by adsathe at 9:56 PM 0 comments
Email ThisBlogThis!Share to TwitterShare to FacebookShare to Pinterest
Links to this post