This morning we took a bus from Gyeongju to Busan. It had been raining most of the day yesterday and last we checked the forecast was supposed to be the same today; so I wore long clothes and had mentally prepared myself for a cooler day. However, we arrived in Busan and it was 70 degrees and absolutely gorgeous outside.

Busan is a major port on the east coast of Korea. Home of the 2nd largest steel company in the world, it boasts a thriving shipping industry, a diverse selection of seafood including the largest fish market in Korea, and has some of the country's best beaches. Kira had been to Busan on her first trip to Korea in 2001; prior to that she was here in 1983 (yep, she was born in this city.)

We dropped our bags at the hotel, changed into some warm weather clothes and headed straight for Haeundae beach just north of downtown where all the major resorts are.

Kira had been to Haeundae on her 2001 trip; from her accounts, she told me she spent time on the beach reflecting on the trip and wondering if her mother had walked the same beach. It was a pretty emotional time. I've seen the journal she wrote in, the ink on the pages are blotched with tears. I was hoping this trip to the same beach would be a little more joyous. It certainly seemed like it.

We walked up and down the beach and on the boardwalk observing the locals and the occasional European tourist. We stumbled across a public footbath that was being well utilized by the local ahjumas and ahjussis (senior citizens). After spending the last 7 days walking all over the place (well, 21 days for Kira) we decided that being 30 years younger than anyone there wasn't going to stop us. The water was kept at a muscle soothing 102 degrees. It followed a winding path through granite channels lined with river rocks. We took off our shoes and dipped in our feet for a nice soak. The Ahjuma sitting next to me laughed when I got in. Kira and I narrowed it down to 2 possibilities: 1) my legs were much hairier than anything she's ever seen, or 2) I had sat on a wet stone and my shorts got wet.

After a nice soak we headed back to the hotel and out for dinner in the local commercial district.

Tomorrow I get to meet Omma (Kira's mom)! She's coming to visit us by train for Ulsan. The three of us are going to have lunch and spend some time in a local park. I'm looking forward to meeting the woman who's brought one more level of happiness to Kira's heart. 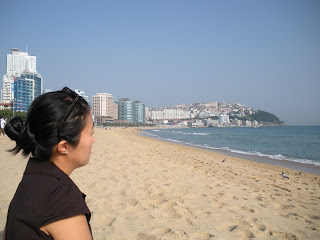 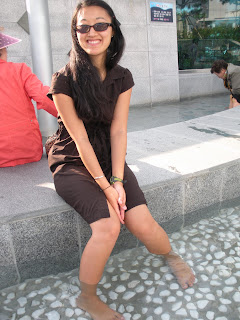 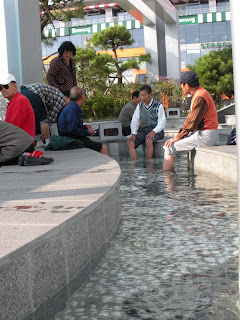 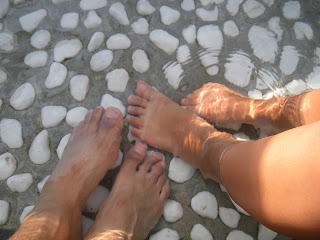 Posted by adsathe at 6:13 AM
Email ThisBlogThis!Share to TwitterShare to FacebookShare to Pinterest